I was recently in conversation with Judy Ling Wong, CBE. She spoke to me about how she sees our towns, cities and buildings as nature. Not just in the sense that there are pigeons and trees and parks even in urban areas, but also in the sense that the metal and concrete we use to build our homes and offices come from the Earth.

A few weeks later I read Clay by Melissa Harrison. It’s a beautiful, slow, well-paced tale that explores the intersecting lives of several people who live near an urban park. Their lives become entwined over like the ‘desire paths’ that criss-cross the long grass of the park.

Each of these experiences led me to think harder about the central role nature in our towns and cities can play in our lives, and particularly the lives of those who are more deprived. More of us than ever live in urban areas today. And yet most of our nature reserves are found in the countryside in places where public transport rarely reaches.

We’ve got better, but there’s still a long way to go. It’s not just about making sure we’re building in wildlife and green spaces to our development. We need to find a way to build that proactively makes our cities greener. And nature conservation organisations, governments and businesses should work together to create new green spaces in cities and towns across the UK where people can connect with nature. Joined up, these could form city national parks, a status London is currently aspiring to. 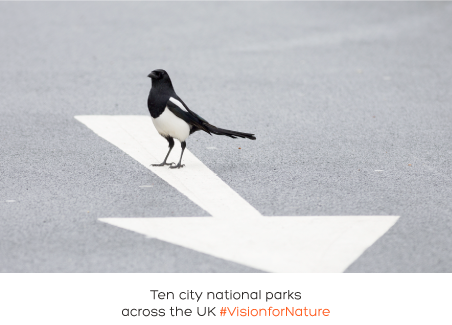 It’s impossible to pretend that nature is out there, beyond the city walls. It’s in here with us too. And our lives are poorer and more sickly for the lack of it. That’s why the Vision for Nature report looks ahead to a future when our health system recognises the central importance of nature and when, crucially we have at least ten city national parks across the UK.

Matt Williams is the Associate Director of AFON and is helping to lead the Vision for Nature campaign and report. In his spare time he works for the RSPB and is a wildlife photographer. Follow him at@mattadamw and mattadamwilliams.co.uk.