Hi, mammal lovers! So, the University Mammal Challenge has come to an end, and we recently found out that our team won the prize for the most mammals recorded outside of bulk-capture methods. For this, we definitely have to thank the infamous rabbits of UEA (University of East Anglia) – so abundant on campus that they’ve become the university’s unofficial mascot – for providing us with no end of opportunistic mammal sightings. 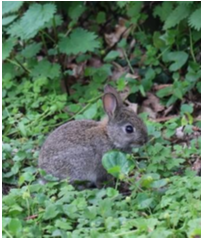 Importantly, though, the challenge also gave us the opportunity to explore some of our campus’ lesser-known mammals, while learning a thing or two about survey techniques along the way!

Live trapping of small mammals taught us all that there is indeed a 6 o’ clock in the morning, and that it’s often very dark, and very chilly! Despite the initial grumbling about frozen toes and tired eyes, we would soon perk up when the first small mammal had to be coaxed out of its luxury hotel (seriously, they had everything in there). Small, furry creatures seemed to be particularly abundant this year, and we often found at least 20 of our 40 live traps occupied each morning! As such, we got a wealth of experience in handling and identifying a number of species, and by the end of the challenge we had captured and recorded the field mouse, yellow-necked mouse, bank vole, field vole, common shrew, and pygmy shrew. 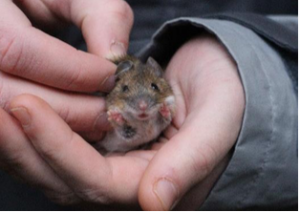 Camera traps provided a much less labour-intensive way of spotting mammals, and allowed us to see some of the larger, more elusive mammals on campus. Positioning our cameras in a couple of woodland patches, we spotted the usual suspects – rabbits and grey squirrels – as well as some less common creatures such as a hedgehog and a small group of muntjac deer. We were even lucky enough to record a family of foxes on several occasions!

By late May it was finally warm enough to get the bat detectors out to survey the bats as they came out of hibernation. This non-intrusive sampling technique gave us the rare opportunity to learn about, and practice identifying, these extraordinary flying mammals through the analysis of their echolocation calls.

In the end, rabbits, squirrels, foxes, muntjac, bats, mice, shrews, and voles were all found thriving within this relatively small patch of land, and we certainly learnt a great deal throughout our search to find them. The competition provided the perfect opportunity for us to practice old skills and learn new ones, as well as making sure that we all still made time to enjoy the outdoors and didn’t go completely insane from the stresses of final-year life! For that, we’d like to say a big thank you to the Mammal Society for coordinating the University Mammal Challenge, and to Dr. Iain Barr for providing equipment and guidance along the way. 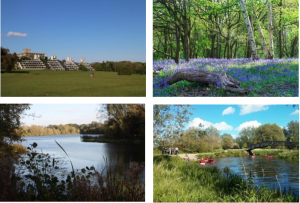 That’s all from us, so bye for now from Nothin’ but mammals (Shawnee Wood, Eleanor Charnock, Ellen Robson, Steven Werrell, Max Crowley).