Last year I took on the role of Team Leader in the Mammal Society’s University Mammal Challenge (UMAC), using a variety of survey techniques to record as many mammals as possible at Nottingham Trent University’s Brackenhurst campus. With a grand total of 6529 observations of 24 mammal species, our team won a trip up to the Cairngorms in Scotland to spend a day learning about Scottish wildcats and current conservation efforts.

Due to work commitments etc., I was the only member of my team able to attend, so I headed up north for a frosty solo adventure. 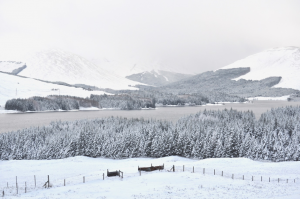 I met with Dr Roo Campbell from Scottish Wildcat Action and fieldwork volunteer Fiona to set up a camera trap in the wildcat priority area, Northern Strathspey.

Camera setup is an absolute art form when trying to detect these elusive animals, and you really have to think like a cat! In a vast landscape, one of the best ways to increase the likelihood of detection is to find a gap in fencing, with a clear trail running through it… but what is the habitat like on either side? Too open? Too wet? Low prey potential?

After a bit of deliberation, we settled on a location. Not only was there a gap in fencing between ideal habitats, there was also an abundance of prey field signs AND what looked like a cat hair snagged on the fence itself!

A pheasant wing hung from a branch was used as a visual lure, while dried valerian root (similar to catnip) provided an additional scent lure. A quail chick was used as bait and was placed at around 1m from the ground, so that the cat would stretch up to reach it, giving the camera a clear view of the dorsal markings. 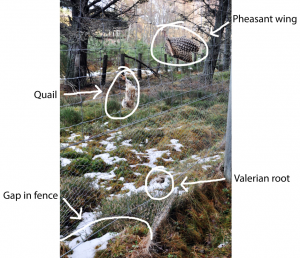 Positioning of bait and lures for camera trap setup.

In the afternoon I met with David Barclay at the RZSS Highland Wildlife Park to learn more about the project and how it operates. I also got to see their captive wildcats, along with the other cold-climate species housed there. I’ve got to say, I was really impressed with the wildlife park! Large enclosures, lots of hiding opportunities/off-show areas for the animals, and a very natural landscape. I didn’t take any photos there unfortunately, as the light was dwindling.

So… it was an excellent little adventure to the highlands. I learnt a lot and found it to be a valuable experience – thanks guys!

I would definitely recommend UMAC to any student with an interest in ecology. Not only did this help me to develop and hone my ID skills (particularly with bat sonograms!), it provided a much welcome break from my studies throughout the year, AND WILDCATS!

Hannah Lockwood is a PhD student at the University of Derby investigating the impacts of predation by domestic cats on British wildlife populations. She gained her BSc from the University of Plymouth, and an MSc from Nottingham Trent University. Research interests include predator-prey relationships, habitat use and spatial distribution, and ecological impacts of urbanisation and human disturbance. You can follow Hannah on Twitter @hlockwood90.