Optimism. It’s an odd word. It’s often used to describe people who are unfailingly cheery even in the direst of straits; those people to whom the glass is always half-full, almost to the point of denial. The optimist is the person who, at the approach of a threatening storm cloud, grins manically and says “it’ll pass” …as the sky as far as the eye can see turns a permanent shade of steel grey.

I must admit, I am one of those people. Give me a dark cloud, and I can guarantee I’ll find a silver lining; a warm, fuzzy kind of denial that protects me from unwanted storms, flat tyres and the inevitable stress of a PhD. In short, I know a thing or two about optimism. But conservation optimism? This relatively alien concept was only revealed to me a couple of months ago, at the International Congress for Conservation Biology (ICCB) where the amazing EJ Milner Gulland was a plenary speaker.

I was incredibly lucky to attend and speak at this conference, which was in the rather exotic location of Colombia in South America (a real ‘pinch me’ moment in my career…most definitely perks of the job). It was a phenomenal experience, with tonnes of fascinating, inspiring talks from conservationists all over the world, battling all means of environmental problems with novel methodology and innovative thinking. But it was EJ’s talk that really stood out for me. She talked of a new campaign she was part of – Conservation Optimism – but it was not what I expected it to mean. It doesn’t mean grinning manically as species crash all around us and the environment is decimated, saying “it’ll pass!”. 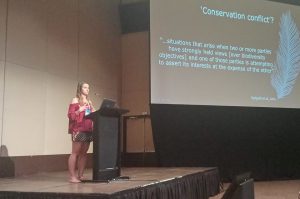 In fact, the concept is made up of multiple different elements that challenge how we act as conservationists today. It carries some important messages to anyone working in the conservation field, and I wanted to take the opportunity to share them with you. EJ’s talk really spoke to me, as I hope it will speak to you – the new conservation movement.

How to be a conservation optimist

This lesson applies to everything, from research to changing parliament. Nothing worth it is ever easy…and nature is probably the worthiest thing we’re fighting for.

In short: be a team, not an individual.

Hopefully, these messages mean as much to you as they did to me. We really need to think about how we act as conservationists, and this is the place to start. I am already a conservation optimist – I’m constantly inspired by the blogs I see, the campaigns I follow, the passion of the AFON community. So keep going, act now, and work together…and hopefully we’ll grow a world full of #conservationoptimism.

Isla Hodgson is studying for a PhD in conservation science at Aberdeen University, and is AFON’s new Associate Director. She is also a freelance researcher for natural history film, most recently working at the BBC, and is currently writing her first book on British wildlife, to be published in Spring 2018. She is successfully distracted from all these projects by adventures with wildlife (and dogs).  Follow Island on Twitter @isla_dawn, and check out her website www.wherethewildthingslive.co.uk.