Did you know that brent geese often hang around with the same ‘friends’? Or that golden eagles hunt buzzards in the Hebrides? How about that Manx shearwaters lay eggs that are 15% of their body mass? That would be like a human giving birth to a baby the size of a 4 year old! These intriguing facts didn’t come from a bird guide or nature documentary, but from one of the hottest events in the birdwatching calendar – the BTO Conference. Back in December, I joined the flock of enthusiastic birders, scientists and conservationists attending the weekend to find out exactly why the BTO remains one of the most important nature NGOs in the country.

I consider myself a basic birdwatcher. I can identify a good number of British species, but I’m not great at birdsong and don’t even get me started on gulls! Because of my relative lack of knowledge when compared to the typical BTO conference-goer, I was worried I would feel out of place – a bit like a semipalmated plover lost on the Isles of Scilly (I had to Google that one). But, just as the semipalmated plover looks incredibly similar to its British ringed cousin, I was quietly confident I would fit in as a bona fide birdwatcher.

Thankfully, I was instantly put at ease by the presence of two people I knew very well, even though they may not have known me! On the Friday evening, naturalist and television presenter Nick Baker gave an account of his work with ring ouzels on Dartmoor, proving that the ‘bug boy’ is also a very passionate ‘bird boy’! The next morning, after the official opening of the conference by BTO director Andy Clements, we were treated to a slightly unconventional talk by presenter and campaigner Chris Packham, who is also the charity’s president. Although he was unable to make the occasion in person, Chris spoke to us via a recorded video from Antarctica (I was very jealous), praising the continued work of the volunteers, and emphasising that we must make use of the knowledge gained through their hard work to campaign for better conservation and animal welfare.

As inspiring as these wildlife celebrities were, in truth, the really important people were those who delivered the lectures. From leading scientists to a wildlife sculpture artist, the variety of speakers was eye-opening. The talks offered an important opportunity for BTO members to learn about amazing science and conservation stories from around the country that would otherwise go unheard. We also learned a thing or two about birds! As much as I would like to outline all of the fantastic talks, unfortunately I don’t have the word count to do them all justice and so instead I would like to share with you some recurring themes – motifs, if you like – that particularly summed up the feeling of the weekend.

First of all, there was the sheer effort that had gone in to the BTO’s research, both across the year and also over the lifetimes of some of the longest-serving members. There were people who had ringed hundreds, if not thousands of individual birds, adding an immeasurable amount of information to the BTO’s database. Congratulatory medals were awarded to some of the most influential birders who had given much of their spare time to the charity, with one being a member for around 40 years. The recognition of these individuals seemed especially appropriate considering the encouraging number of young people attending, many of whom will no doubt go on to win similar awards in the future. 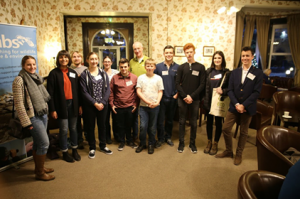 This was the second motif of the conference – acknowledging the importance of the next generation. It didn’t go unnoticed to me that a good portion of the delegates would easily qualify for a free bus pass, but their willingness to engage with young birders was quietly evident. Many of these individuals have an unparalleled wealth of birding knowledge and I genuinely hope that this huge resource can be used to train up a new cohort of naturalists.

Looking to the future, one thing is clear – technology is the conservationist’s friend. Advancement in technological tools was a common feature in many of the talks, and in each case they offered scientists incredible insights that previously could only be dreamed of. Cameras on gannets have showed us their hunting strategies. Nest camera-traps have identified important predators of curlew. GPS loggers on short-eared owls have shown how they prefer to hunt along hill ridges at night, increasing the risk of collisions with wind farms. Similar loggers on brent geese have pinpointed the exact route of their mind-blowing migration from Ireland to the high Arctic via Iceland. Perhaps the most ingenious use of new technology was a contraption that caps long-line fishing hooks until they have sunk to a depth that is out of the reach of hungry albatrosses, an invention that very rightly won a scientific grant from the BTO for further research.

My overall impression of the 2017 BTO Conference was one of optimism and passion. The sheer level of accumulated knowledge in the room was difficult to comprehend and, if truth be told, rather intimidating. However, I found the lectures extremely informative and delivered in a way that even a basic birder such as myself could enjoy. But if there was one take-home message from the perspective of an AFON member it is that the BTO needs to strengthen its younger membership in order for it to operate as effectively as it has done so far. So click the link here, find one of the many types of survey in your local area and make the most of the vast collection of knowledge within the BTO to improve your bird identification skills.

Russell Barnett is a 21-year-old filmmaker and photographer, with a BSc Conservation Biology at the University of Exeter’s Cornwall Campus. You can follow him on Instagram @russellebarnett and check out his website.