It’s just over a week since Birdfair finished and I’m finally recovered from the Birdfair Blues. They seemed to hit particularly hard this year but I’m taking this as a sign of a great Birdfair. I think I’m even brave enough to say it was the best Birdfair yet; particularly for AFON as a group. 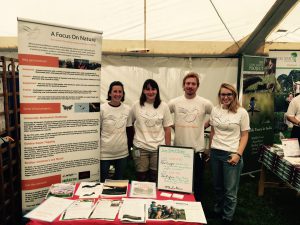 From l to r: Charley, our mentoring coordinator, myself (Beth), projects officer, Elliot, our new creative director, and Ally, online and social media manager, at our AFON stand at Birdfair 2017!

This was my fifth year at Birdfair representing AFON and the first year that we have ever had a stand. There was lots of excitement from the committee when I passed on the news that we’d been offered a spot in Marquee 8, followed quickly by a slight panic from me as I realised I now had to get all the content together to make our stand look okay! I needn’t have worried – we may not have had the budget that lots of other stands have but we do have some very talented members and a passionate committee I could take advantage of.

I arrived at Birdfair on the Thursday night to get the stand set up, rather than fight through the crowds with everything on Friday morning. We were located in Marquee 8, next to the local produce tent and not very far away from Events. After some slight confusion about our location, we set up between the Arachnid Society and Greig Smith Travels. I’d managed to gather together a few bits and pieces to lure people in, including a folder of our members’ work, information on the mentoring scheme and our lovely new Now for Nature postcards. These postcards are for young people to share with us what they are doing now to help our natural world. Despite my fears that our stand would look empty and rustic there was more then enough content to fill our table and it wasn’t long before I went in search of the beer tent and a chance to catch up with people before Birdfair really kicked off. 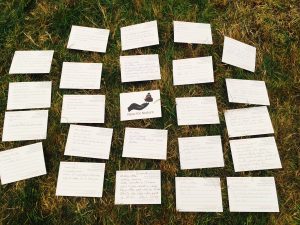 The brilliant selection of filled-in Now for Nature postcards from Friday at Birdfair!

Friday came and suddenly time started to fly past in a bit of a blur! The stand really gave us a chance to attract the attention of potential members and supporters and showcase what AFON does. It was great to hear that some people had heard of us, and the committee, who had all volunteered to man the stand, were able to inform those who weren’t quite so sure about us who we are and what we do. It was fantastic to see ‘older’ members stop by and update us on what they had been up to since the last Birdfair whilst we also managed to recruit plenty of new members. Having a stand didn’t just make us visible to members though; we had a number of people approach us from various organisations to discuss ways that we could work together to provide opportunities for young people. It was all very exciting so watch this space!

Although I failed to make it to a single one, it was great to see plenty of young people stepping forward to give talks in the different Lecture Marquees. They covered a huge range of topics from the Birds of Spurn, to Rewilding, to identifying grasshoppers to Freshwater Fish. Some of the talks were standing room only and it was really heart-warming to see our members going along to support each other – that is what AFON is all about; providing a platform for that network of likeminded individuals who do their best to support and encourage each other in our shared passions. 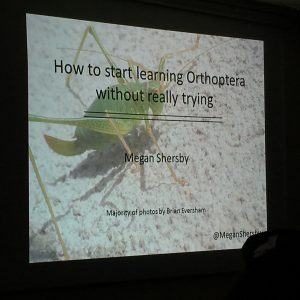 Megan’s talk packed out the room with Martin Hughes-Games sitting front and centre! 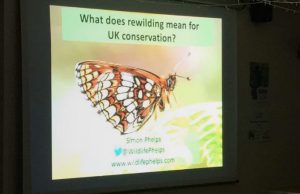 This brilliant talk by Simon also packed out the room, and investigated what rewilding really meant, and different parts of the UK where it is in practice

We had our now annual gathering on the Saturday where we also take a photo. We didn’t quite manage to beat last year’s numbers but it was close and gives us something to aim for next year! This was also a chance to introduce our new(ish) Creative Director, Elliot, to the masses, and say a fond farewell and huge thank you to Matt Williams who is a stepping down from the committee shortly. I always make a point of stepping back at this point to watch the crowd of young people all drawn to Birdfair from across the country by a shared love of nature, chatting and enjoying each others company. Young people get a lot of stick but that group that were gathered there are blooming marvellous and I am so so proud to be involved with a group that represents them.

Beth Aucott has sat on the A Focus on Nature committee since the beginning as a Projects Officer. She is the Warden at RSPB Fowlmere. Follow her on Twitter @BethAucott and Instagram @bethaucott.