The drive to Burghead was beautiful. This small seaside town is situated on the edge of a peninsula protruding into the Moray Firth, so it’s surrounded by open ocean on three sides. As we made our way up the high street it felt like we were at the edge of the world, and in a way we were. More of northern Scotland could just be seen in the distance, but the space between still seemed vast.

After unpacking, my boyfriend and I made the short walk to the very tip of Burghead, climbing up to the highest point to take in the views. Down below, oystercatchers zoomed past, their alarmed cries cutting through the wind. A pair of cormorants glided effortlessly by, their slender necks held parallel to the choppy waves below. The Moray Firth is also home to a resident population of more than 140 bottlenose dolphins, so I kept my binoculars trained on the horizon for any dorsal fins breaking the surface.

Once the wind had completely numbed our ears, we made our way back down and walked along the harbour. Every time a wave broke and a plume of froth shot upwards my heart leapt, but it was just the ocean playing tricks. The water was a stunning colour; azure blue and bottle green blending like marbled ink. Together with the rough rocks spotted with white barnacles, the sight was a feast for the eyes. 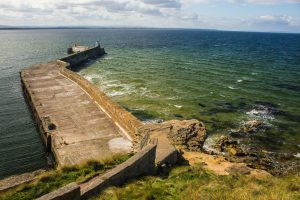 Soon we reached Roseisle Forest, a stunningly beautiful pinewood that stretched for over 700 hectares alongside the beach. As we made our way up the slope between the first rows of trees, sand dunes transformed to mounds of fallen pine needles and the sound of the ocean faded into silence.

A wide trodden path snaked between the trees. Before long, a sudden sparkle caught my eye, and I was amazed to discover that a spider no bigger than a fingernail had strung its web between two trees several metres apart. Luckily the sunlight had caught the web; otherwise we may have walked straight through it. We spent the next twenty minutes taking turns to photograph the tiny creature. Getting him in focus was a real challenge with the web swaying to and fro in the breeze, which must have felt like a gale to the spider. After getting some shots we were happy with, we left him to sit and wait for his unsuspecting lunch. 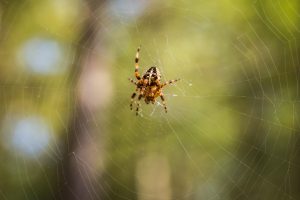 Leaving the forest behind, we headed back out into the sun. The beach was a patchwork of fine, flat sand and seaweed-coated rocks, where puddles of seawater were trapped from returning to the ocean until the tide swelled again. We began to search the rock pools; one of those timeless summer activities that nobody is ever too old for. We stepped slowly from one rock to the next. A combination of slick seaweed and soft moss made me take extra care; although it was a beautifully warm day, I feared a dip in this water would still be a chilly one. Another reason to watch your feet was the abundance of common limpets clamped firmly to the rocks. We kept an eye out for any crabs lurking in the shadows, but perhaps the day was too hot for them. However, there were plenty of hollowed-out crab shells and discarded legs; remains of somebody’s breakfast no doubt.

There were also several rusty red spherical bodies with tiny tentacles tucked up tight. They were beadlet anemones, an extremely territorial creature that attacks rivals with stinging cells that act like harpoons, injecting the unfortunate neighbour with venom to clear them off their patch. Baby beadlet anemones are kept in the parents’ body cavity, and when they are ready to be born the parents eject them through the water, where they find a rock to make their home.

We’d planned on continuing our walk along the beach to see if we could find any crabs or maybe starfish, but just at that moment the clouds grumbled and it began to pour, so we hurried back to the cottage instead. Shut inside, all there was to do was have a look at the photos from today and plan where to go tomorrow. 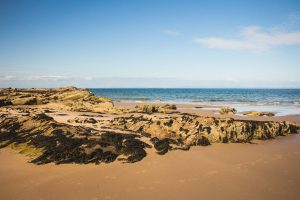 Rebecca Gibson is a wildlife writer and photographer based in Cumbria. She loves macro photography and captures close-up texture to accentuate the everyday things that are often missed. She’s passionate about blogging, and writes about her adventures in nature on her site, “On the Wing”. Rebecca one day sees herself as a columnist for wildlife magazines, to encourage a greater involvement in wildlife with her writing and photography. Check out her website https://rebeccaonthewing.com/ and Instagram https://www.instagram.com/beccafegibson/